That looks like a bust of a cranky baby made out of ham.

WHAT DOES THAT MEAN???
Top I think the interviewer is actually more annoying than Ivan Moody.

I think the interviewer is actually more annoying than Ivan Moody.

Darryl Smyers of the Dallas Observer recently conducted an interview with FIVE FINGER DEATH PUNCH guitarist Jason Hook. A couple of excerpts from the chat follow below.

Dallas Observer: There are so many sub-genres in metal these days. Does your band fall under any particular category?

Hook: I just say we play hard rock. I think that heavy metal is certainly awesome, but hard rock has a wider audience. And I don't think there is anything wrong with being a hard rock band. I could go into it in more depth, but I'll take answer A: hard rock.

Dallas Observer: The band achieved success relatively quickly. What about the music drew a large fan base in such a short time?

Hook: I think the music is designed to be accessible. We always prioritize the song first. The priority is the song, and I think that has an effect on the listener. [Singer] Ivan [Moody] does a great job telling a story. That is just something he has as a gift.
Dallas Observer: Are you guys working on a fourth effort and will it be a CD/DVD combination?

Hook: I don't want to get in trouble by leaking it out that we are already starting our fourth record, but the general idea was to start preparing for the next record as early as possible. I think that the more choices you have, as in pieces of music, the better. Let's say you have to have a 10 song record in 18 months. Well, I'd rather start preparing 35 songs now and pick the best 10 later instead of having to crunch out 10 in the last month.

Dallas Observer: There is a wide demographic of people who go to hear the band live. What does it take to appeal to fans of many different ages?

Hook: I think it comes down to songs, personality and performance. There is a lot there for everybody. If you are a drummer, we have a star drummer. If you like hotshot guitar playing, we have that. If you are into bands that are angry, we are certainly that. But we also have melodies and choruses. There is a lot there for just about everybody. We are the eBay of metal.

Dallas Observer: You guys also have a nice sense of humor. That's missing from a lot of metal bands.

Hook: Again, that would be part of the personality of the band. People like the music and then they want to find out about you. If you have a good personality, that makes it so much fun for everybody else. If you are a dud, it makes it one-dimensional. We like to use humor and have fun with people. I am glad that we are not a stick in the mud.

"If you like hotshot guitar playing, we have that. We are the eBay of metal."

"Ivan does a great job telling a story. That is just something he has as a gift. We are the eBay of metal." 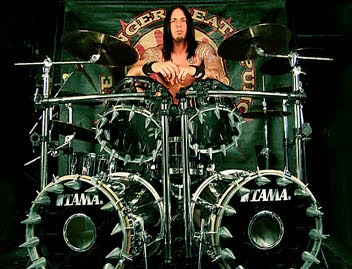 "If you are a drummer, we have a star drummer. We are the eBay of metal."

what's up with the fungal armpit there, dick ?
HEAD BOPPAZ RECORDS YOU BITCH-ASS HOES
Top

It almost looks like a rash from him shaving his pits. What a fag.

Notice the machine guns mounted on the drumrack in that picture?

I think it comes down to songs, personality and performance

something that five finger death punch is very short on.
Top

I love this line too:

Hook: I just say we play hard rock. I think that heavy metal is certainly awesome, but hard rock has a wider audience.

Well of course, just call yourself whatever genre you think will sell more albums.

I'm imaging this record being used as background music for a six sigma training video.

hahah yeah these are all about CONTINUOUS IMPROVEMENT.

this is music that alcoholic barfly MMA jerkoffs listen to when they wanna get fired up about 'merica.
Top

A friend of mine didn't believe that there still was nu-metal bands so I told him to look up FFDP.

Once he found photos he couldn't stop laughing at them for ten minutes.

Than I asked my friend from 3 Inches of Blood if they ever played with them and he told me a story about the Rockstar Mayhem tour.

FFDP was a mainstage band for that "tour," and apparently the midget singer would hand around the second stage all day and than during their set he would tell their fans a bunch of lies about the second stage bands insulting FFDP onstage.

Friendly Goatus wrote:I want to shout obscenities into her vagina and then whisper apologies into her butthole