sorry if anyone was aware of this guys shit already but

SPOILERSPOILER_SHOW
Keith Raniere
Conceptual Founder:
Ethical Humanitarian Foundation
World Ethical Foundations Consortium
In Lak' Ech
Creator:
Rational Inquiry®
Ultima®
Human Essentials®
Founder:
Executive Success Programs, Inc.
NXIVM Corporation
Jness
A Cappella Innovations
Rainbow Cultural Garden
Scientist, mathematician, philosopher, entrepreneur, educator, inventor and author Keith Raniere has devoted his life to studying the human psychodynamic and developing new tools for human empowerment, expression and ethics. From early childhood, he demonstrated astounding gifts, which were nurtured by his parents and subsequent mentors. By the age of one, he could construct full sentences and questions; he was able to read by the age of two. An autodidact, he directed his learning abilities to learning itself, studying its science and art in order to find optimized learning strategies and methodologies. Applying this skill to athletics, Keith Raniere excelled in judo and was an East Coast Judo Champion at age eleven. He also excelled in numerous other sports including volleyball, tennis, table tennis, diving, softball, cycling and skiing. By the age of twelve, he taught himself to play piano at the concert level; his passion and aptitude for music would inspire him to master many other musical instruments. He taught himself high school mathematics in nineteen hours at the age of twelve; only one year later, he was proficient in third-year college mathematics and was a professional computer programmer.
Keith Raniere entered Rensselaer Polytechnic Institute (RPI) at age sixteen. From his first semester onward, he began taking Ph.D. level mathematics courses, ultimately taking most of the graduate-level physics and mathematics courses available at the time. Upon graduating, he became RPI's first triple major, earning degrees in mathematics, biology and physics, with minors in philosophy and psychology, and an expertise in computer science.

Noted as one of the world's top three problem solvers, Keith Raniere was honored in 1989 by the Guinness Book of World Records in the category of highest IQ. He has an estimated problem-solving rarity of one in 425,000,000 with respect to the general population. He has intellectual patents pending in the areas of human potential and ethics, expression, voice and musical training, athletic performance, commerce, education and learning, information processing and human modeling. He also holds several technological patents on computer inventions and a sleep guidance system.

As an entrepreneur, Keith Raniere transformed a five-person organization into a corporation of nearly 400,000 in a mere two years. His company, Consumers' Buyline, Inc., was responsible for an estimated one billion dollars in product and service sales in its second full year of business and was featured on the American Spotlight. A millionaire at the age of thirty, Keith Raniere was worth $50 million only two years later.

In 1998, Keith Raniere founded Executive Success Programs, Inc. with Nancy Salzman, one of the world's top trainers in the field of human potential. The company advances human potential and ethics through personal and professional development programs, corporate trainings, and a comprehensive personal and professional coaching program. At the heart of the company is Rational Inquiry®, Keith Raniere's revolutionary patent-pending technology designed to enhance performance in virtually every field of human endeavor.

Keith Raniere's vision for humanity and human potential led him to found various other companies in the following years. In Spring 2003, he founded NXIVM Corporation, a seminal company for various other endeavors involving the creation of community-building spaces housing athletic, spa, and health and wellness facilities. He is the conceptual founder of Jness, a company started five years later to promote the furtherance and empowerment of women throughout the world. Late in 2006, he founded Rainbow Cultural Garden, a revolutionary child development program promoting children's cultural, linguistic, emotional, physical and problem-solving potential. During 2007, Keith Raniere founded A Cappella Innovations, a non-profit organization seeking to advance music, the arts, expression and humanity through the a cappella genre. That same year he created Ultima® and with colleague and co-author Ivy Nevares now implements the program through her company, Nataraja. Ultima® is a multidisciplinary program designed for the advancement of human expression.

Since July 2005, Keith Raniere and Ivy Nevares have been special contributors to the scientific journal Conocimiento, a biweekly publication serving the academic, business and scientific community of the greater metropolitan area of Monterrey, Mexico. A special edition was dedicated entirely to Keith Raniere and his literary creations with Ivy Nevares. In August 2008, the authors published their first book—Odin and the Sphinx—the first in a series of collections of their articles. The following year they published the second book in the collection, The Sphinx and Thelxiepeia. Their third book in the series is forthcoming.

In 2007, Keith Raniere conceptualized the Ethical Humanitarian Foundation, a private, not-for-profit foundation supporting endeavors that promote embracing humanity, developing ethics, and moving humankind towards a more noble civilization. In August 2008, he conceptualized the World Ethical Foundations Consortium (WEFC), a non-profit initiative dedicated to building a compassionate, ethical humanity. The WEFC—supported by the Ethical Humanitarian Foundation—hosted its first major public event in the New York State Capital Region in April 2009. During the event, Keith Raniere introduced Human Essentials®, a comprehensive program for developing compassionate ethics and global communities. Because of this initiative, His Holiness the 14th Dalai Lama—Tibet's head of state and spiritual leader—scheduled a public address, on Compassionate Ethics in Difficult Times, on May 6, 2009 in Keith Raniere's home district of Albany, New York.

More recently, in September 2008, Keith Raniere conceptualized In Lak' Ech—a civil non-violence movement in Mexico—after having met with a group of concerned citizens native to that country. This movement seeks to transform the violence gripping the social fabric of Latin America through active, non-violent protest and compassion.

SPOILERSPOILER_SHOW
During 2007, Keith Raniere founded A Cappella Innovations, a non-profit organization seeking to advance music, the arts, expression and humanity through the a cappella genre. That same year he created Ultima® and with colleague and co-author Ivy Nevares now implements the program through her company, Nataraja. Ultima® is a multidisciplinary program designed for the advancement of human expression.

Out of all these profoundly douchey credentials, somehow this is the worst

Inside a Secretive Group Where Women Are Branded

Sure he unlocked the secrets of the universe, but was he on a hit show about glorifying barfly loser culture and then another centered around how fat he got afterwards? Didn't think so.

you're supposed to start shit with psychiatrists not physicists ya dummy

FVBTVS wrote: ↑
Thu Mar 15, 2018 7:56 am
you're supposed to start shit with psychiatrists not physicists ya dummy

FVBTVS wrote: ↑
Thu Mar 15, 2018 7:56 am
you're supposed to start shit with psychiatrists not physicists ya dummy

NEW YORK (AP) — The leader of a secretive group in upstate New York turned female followers into brainwashed “slaves” who were branded with his initials and coerced into having sex, authorities alleged on Monday in a criminal complaint charging him with sex-trafficking.

Keith Raniere, co-founder of the group called Nxivm, was arrested in Mexico and returned to Texas Monday, authorities said. He was to appear in court on Tuesday in Fort Worth on the charges filed by federal prosecutors in Brooklyn.

According to the complaint, Raniere — known within the group as “Vanguard” — oversaw a barbaric system in which women were told the best way to advance was to become a “slave” overseen by “masters.” They also were expected to have sex with him and do menial chores for masters, and to keep the arrangement a secret or be publicly humiliated, the complaint says.

The name of Raniere’s attorney wasn’t immediately available on Monday. In a letter attributed to Raniere previously posted on a website related to Nxivm, he denied the practices were sanctioned by the self-described self-help group.

“These allegations are most disturbing to me as non-violence is one of my most important values,” the letter said.

The complaint said that many victims participated in videotaped ceremonies where they were branded in their pelvic area with a symbol featuring Raniere’s initials.

“During the branding ceremonies, slaves were required to be fully naked, and the master would order one slave to film while the other held down the slave being branded,” the complaint says.

Investigators said Raniere preferred exceptionally thin women, so “slaves” had to stick to very low-calorie diets and document every food they ate. As punishment for not following orders, women were forced to attend classes where they were “forced to wear fake cow udders over their breasts while people called them derogatory names,” or threatened with being put in cages, court papers say.

Raniere left the United States late last year after The New York Times reported the stories of some women who defected from their secret sorority and the government began interviewing potential witnesses. He sought to cover this trail by using encrypted email and ditching his phone, court papers say.

He was ultimately found staying with several women in a luxury gated community in Puerta Vallarta where villas can run $10,000 a week to rent, investigators say. After authorities took him into custody on a U.S. warrant, investigators said the women got into a high-speed car chase.

The website related to the group describes Raniere as a “scientist, mathematician, philosopher, entrepreneur, educator, inventor and author” who has “devoted his life to studying the human psychodynamic and developing new tools for human empowerment, expression and ethics.”

Nxivm’s Mexican affiliate is headed by Emiliano Salinas, a son of that country’s former president. Several women who belong to the group in Mexico have traveled to Albany, where they were branded, two former Nxivm members told the Times.

Salinas has also denied that the sorority is affiliated with Nxivm.

Raniere and Nxivm have been the subject of criticism for years, dating back to at least 2012 when the Times Union of Albany published a series of articles examining the organization and allegations that it was like a cult.

Over the years, Nxivm has attracted a following that includes Emmy Award-winning actress Allison Mack. Authorities also say Raniere has been bankrolled by Clare Bronfman, an heiress to the Seagram’s liquor fortune.

I had never heard of this guy (sorry if I neglected a choice link in here!)

I cannot believe dude flew under the radar for so long

hahaha I now see your robust contributions in here

to be clear, the "under the radar" is not my radar, it's the law's

I'm laughing at my own idiotic negligence!

Allison Mack indicted! digging my way out of the shame-hole 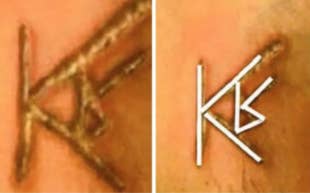 did this guy actually fail to flip the R of the brand, leaving the victims with a shitty backwards-R brand? just terrible

maybe its upside down
Top