it totally is but i'm inexhaustable for the right cause

every single one of these cult documentaries speaks volumes about the human condition - more than I think most people would like to admit. like... truly universal stuff.

I don't think anyone is immune to falling into it (given a certain life path... which is admittedly kinda cheating). I think someone could credibly say "this wouldn't happen to me", but not "this could never have happened to me"

on the other hand, I think it takes a special kind of maniac to be at the center of one of these things. I'm plenty narcissistic and manipulative and I still doubt I could go full KR

i am frustrated by the pace too. the decision to focus on the personal narratives of folks they had the most immediate access to and what was filmed in real time and why and all that is understandable but there's still a lot of other shit to talk about that hasn't been touched in 4 hours now. by my count there were at least 3 suicides associated with these people and when they were at their most powerful they were being funded and effectively owned by members of the bronfman family. i cannot accept any narrative that doesn't include this very central aspect. there's still 5 hours to go obviously but i can already see how only focusing on the incredibly interesting but mundane and human idiosyncrasies of people who are dissatisfied with material success etc is going to exclude important biographical details of this guy. that he was a compulsive gambler, a pyramid schemer and basically a pedo in the 90s and somehow was able to conceal all of that through nda's and abuse of the legal system is pretty important to all of this

having said all that i dont just agree i identify strongly with your universal sense of non-immunity and i think the personal real time-y narrative approach is conveying that quite effectively! telling these stories should probably always crack this thesis every time, the best cults are for doing good, being good, attracting good then maybe obfuscating good. this is why fight club is fundamentally a great movie! it hinges on that charismatic fulcrum! only branding aesthetics will repel you or attract you but, just like scientology, if the physical / asecetic rituals are dialed in the right hypnosis sweetener on this stuff actually works. the tech works! hell you dont even need fucking hypnosis just use yoga

while we were watching the last episode i texted my friend the other night " if i end up in a cult dont even bother trying to get me out and dont fucking tell the media im not this type of person that would do xyz because you know that i am. just say he said it would be cool and that rules i'm happy for him"

AND its just amazing to me trying to square the utterly pathetic rookie shit of branding the flesh of your married cultists when you are just so undeniably good at melting their minds already. the footage of kr meeting alison mack for the first time was ! ! ! it was like a gelatinous cube absorbing a level 1 adventurer. her fate was sealed the second she went to volleyball. 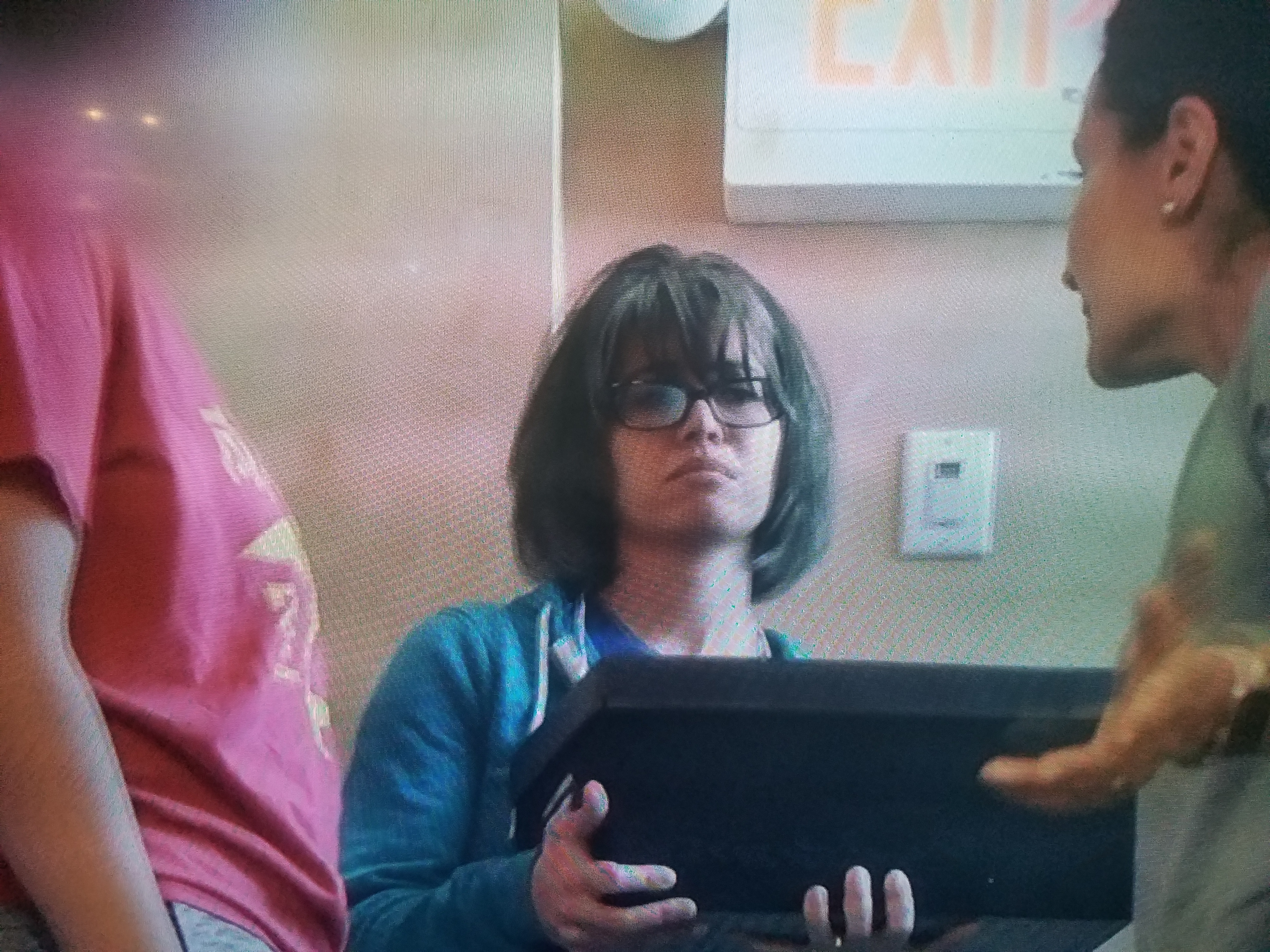 didnt want to neglect to post this unforgettable face during the proceedings. she is so bummed. she was this close to being indoctrinated and enslaved and its all going south right before her eyes. a grey haired child in the middle of a divorce being handed a black box of her family's lies and its the kind of art i live for

hahaha will write back later if I come up with any non-gelatinous (cube-brain) thoughts about the big text but for now: YES that woman was such a character and stuck with me. I need to watch that little sequence again. one of the best moments on the show for sure.

(her bone structure, with her overall aesthetic, screams "makeover imminent")

caught up. shit aint even worth joking about.
Top

ALL THINGS CONSIDERED: im watching the first episode of Lovecraft Country, which im quite enjoying!

did he make the sex girl patrol and their recruits get skinny because of his cancer wife?
Top

affluent educated white people edging towards middle age but only able to articulate like teenagers?

the bullshit with the Dali Lama...
Top


the bullshit with the Dali Lama...

I guess I should just watch the show, but can I get a quick TLDR with the Tibet thing? Did LXCDEVIXDS know the Dalai Lama?

My folks were pretty involved Buddhists growing up, so I knew a ton of 'free tibet' Americans. Very good people generally, but the peripheral crowd was FULL of loons.

the dalai lama stuff is great in isolation, so if you can find just that part, it would be worth your time

but from the DCLXVI perspective, the guy was clearly desireable for PR reasons. their meeting with him would legitimize the group, and it's as simple as that. KR doesn't give a shit about tibet. it's not clear he cares about much beyond self-aggrandizement and getting his dick wet (and ideally, those two things happening synergistically)

I can't remember if I talked about this back when the news first broke, with the brandings coming out and everything.... did they legitimately fuck up their "KR" branding device when manufacturing it? because if you look at the piece of metal itself, it'll look like a KR... but the resulting brand/scar will end up mirrored. maybe this will be the show's culminating moment. cult leader branding people willy-nilly; no quality control in the mutilation of victims.

or maybe he has some cute explanation like ... I remember david koresh having a cross tattoo on his torso that was almost 100% upside down, but he claimed that it "just fell that way from heaven" - I am trying to fact-check this and it doesn't seem to be waco-related. does this ring a bell to you guys?

The upside cross also represents Saint Peter being crucified upside down so maybe that is why Koresh had it that way. As it reference to not being worthy to die the same way as your master. I don’t know dick about Koresh though. One of Keith’s stupid books allegedly had forward from the Dali lama but I haven’t looked into if that is bullshit or not. It’s collectors item on amazon now going for about 375 clams. I’m sure Smegma will snap up a copy.

i think they tried to conceal that the initials were the full intent of the design by saying it was something else, i forget the explanation but it was was terrible

it's a bird and a river and a mountain!

Ms. Salzman, who was a first line master in D.O.S., testified that Mr. Raniere came up with a plan to say that the brand was not meant to include his initials but represented the seven chakras, the four elements, or “Bar Alpha Mu” — a combination, apparently, of a mathematical symbol and two Greek letters.

is that not what you meant
tee hee
Top

it's not not what I meant

I'm still not sure if they intended the R to be a "proper" R only when the branded person saw it in the mirror (which is what results when you get branded by a piece of metal with an R element that looks like an R, not Я)

I don't think any of the rationale/explanations necessitate an Я being on the person's body. the bar alpha mu thing (line w/ A M under it) would accommodate either an R or an Я pushed into an M. same goes for the elemental symbols nonsense.

this is extra confusing because on the show and on the internet they often flip the image so that the viewer can instantly comprehend it. but sarah herself said she was looking in the mirror before she realized the R was supposed to be an R.

he can make up all the deep, obfuscatory explanations for his symbol he wants and STILL overlook the fact that the the brands will come out mirrored with respect to the piece of metal doing the branding

At the time of his death didn’t Joseph Smith have more members in his command than the US military at that time ‘ !? ‘ also don’t they secretly own Vegas and Hollywood or at least attempt to through Scientology ‘ and beyond that ‘ don’t they have a prophecy that they’ll save America at the last minute ‘ and also they aren’t lacking in numbers etc ‘ ruvn ‘

When you kill Saturn ‘ what happens to aborigines ‘