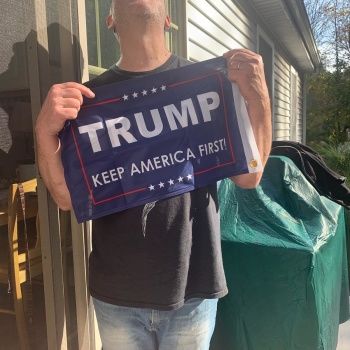 Nice job by Republicans. Now, because they didn't have the balls to distance themselves from Trump, they lost complete control and it will be an all Democrat government.

brobot wrote: "Some guy asked me if I was a robot...like a Relapse robot? I have no idea what he was talking about."

GLEN BENTON wrote: ONLY THING IS I LOOK AT THE GIRLS AT THE MOVIES, AND THERE BETWEEN 10 AND 14!

I will however use his beard to wipe my ass with. Fuck him.
TROLL WORLD ORDER 4 LIFE

Toilet Fleet
Daddy would you like some sausage?
Posts: 8037
Joined: Sat Mar 15, 2008 7:49 pm
Location: You can find me in the tub, bottle full of Bud.
Contact:
Contact Toilet Fleet
AOL

MeatGrease wrote: ↑
Sat Nov 07, 2020 11:28 am
This isn’t over. Trump isn’t going anywhere fags. This election is stolen, that’s beyond a shadow of a doubt. The media cannot select the president of the United States, only the American people can, and they overwhelmingly selected Donald Trump.


MeatGrease wrote:Going forward I do NOT recognize the legitimacy of the Democrat party. I will NOT obey Democrat passed laws. No Democrat has the authority to govern me. I will NOT comply.

lol going sovcit to own the libs

You apparently didn't read the book

For people that aren't actual literal morons when it comes to law, this (and merely one example of many!) is about as explicit a benchslap as you can hope for when the findings deal solely with evidentiary standards, type of relief sought, and parties:


This “supplemental evidence” is inadmissible as hearsay. The assertion that Connarn was informed by an unknown individual what “other hired poll workers at her table” had been told is inadmissible hearsay within hearsay, and plaintiffs have provided no hearsay exception for either level of hearsay that would warrant consideration of the evidence. See MRE 801(c). The note—which is vague and equivocal—is likewise hearsay. And again, plaintiffs have not presented an argument as to why the Court could consider the same, given the general prohibitions against
hearsay evidence. See Ykimoff v Foote Mem Hosp, 285 Mich App 80, 105; 776 NW2d 114 (2009). Moreover, even overlooking the evidentiary issues, the Court notes that there are still no allegations implicating the Secretary of State’s general supervisory control over the conduct of elections. Rather, any alleged action would have been taken by some unknown individual at a polling location.

Trump has hired quite possibly the least competent lawyers in history when it comes to pursuing electoral challenges, and dumbasses like you are hoodwinked into thinking they're going to do something because they've filed suit. And I will put actual money on the line here: at least one Trump lawyer will be facing Rule 11 sanctions because of the frivolity of the action filed.
Top

On one hand, TF is an actual attorney.

On the other hand....well...
MeatGrease wrote:
I became fully redpilled by the summer of 2015 but was already holding back as early as 2014. Before that I was a anarcho punk.

Ideally, society should be organized via a warrior-priest aristocracy.

I can trace my ancestry all the way back to historic germanic tribal chieftains in fact.
Top

Toilet Fleet wrote: ↑
Sat Nov 07, 2020 3:53 pm
And I will put actual money on the line here: at least one Trump lawyer will be facing Rule 11 sanctions because of the frivolity of the action filed.

Willing to act as escrow agent in this wager, if need be.
I just want MG to prove he has any convictions at all....

Meat grease what do you think of his number one mentor basically being a real life cartoon version of one of the reasons why Anti-semitism exists, you dumb fucking prick


What the fuck is on this guys shirt, Gizmo?

Rightwing nutcases arrested in Pennsylvania riding around in a hummer covered in QAnon stickers filled with fake ballots and guns.


This guy needs his own youtube show where he rants and raves about various topics and then top it off with an unintentional double entendre.
TROLL WORLD ORDER 4 LIFE

YOU PUSH AND YOU PUSH, YOU TEST AND YOU TEST - YOU KNOW WHAT YOU'RE GONNA GET DON'T YOU? DON'T TRY THAT SHIT WITH ME BUDDY, I'LL PAY YOU TO FUCK MY WIFE WHILE I PRETEND TO BE ASLEEP. YEAH YOU HEARD ME.

I FUCKING TOLD YOU LIBERAL MOTHERFUCKERS THE SUPREME COURT WAS GOING TO FIX THIS BULLSHIT. NEXT TIME YOU PULL OUT OF MY ASS I WILL BE SO PISSED.
TROLL WORLD ORDER 4 LIFE

kevin hash wrote: ↑
Sun Nov 08, 2020 1:44 pm
I FUCKING TOLD YOU LIBERAL MOTHERFUCKERS THE SUPREME COURT WAS GOING TO FIX THIS BULLSHIT. NEXT TIME YOU PULL OUT OF MY ASS I WILL BE SO PISSED.

I predict 4 years of extremely mediocre corporatism paving the way for a fascist like Tom Cotton to lead us to glorious times in 2024.

LISTEN YOU LIBERAL MOTHERFUCKING COCKSUCKERS THE NEXT TIME YOU WHIP IT OUT I MIGHT HAVE TO SUCK IT. YOUR LIES ARE MAKING IT HARD FOR ME TO NOT THINK ABOUT SUCKING ON A JUICY HOT DOG.
TROLL WORLD ORDER 4 LIFE

Every time a republican sits there and screams about non existent voter fraud a Democrat needs to scream louder about very existent voter roll purges, voter suppression and extreme gerrymandering. The democrats need to have their own assembly line system of breeding judges like the federalist society. The democrats need to start using the “never played defense” strategy the republican do. Why don’t they? Because they are totally fucking worthless.

"David Bossie, who is supposed to be overseeing the Trump campaign’s legal challenges on the election, has coronavirus, CNN confirms. He’s been in the campaign’s headquarters and traveling extensively." - Kaitlan Collins, CNN Whitehouse Correspondent
Top

these bums love them some rona
tee hee
Top

I guess this will be the new republican strategy from now on, just declare everything fraud when ever you lose.

Toilet Fleet
Daddy would you like some sausage?
Posts: 8037
Joined: Sat Mar 15, 2008 7:49 pm
Location: You can find me in the tub, bottle full of Bud.
Contact:
Contact Toilet Fleet
AOL

I read the Trump legal team's challenge to the PA balloting process (https://cdn.donaldjtrump.com/public-fil ... -filed.pdf) and woof

Generally speaking, when you have to rely on a characterization of a statute instead of a citation of the statute, you're fucked—and that's precisely what they're doing with 25 P.S. § 3146.8
Top
Post Reply
6101 posts