2012 gathering of the juggalos of the Juggalos

I've found that I need this every year

Not far from home for you. You have an excuse to go back now this summer.
Top

i'll give it to metalsucks; they had me going for a minute

Another gathering of the juggalos-documentary. This one seems more pro-Juggalo, but it still features some awkward moments. 8:09....

jaded juggalo guy was the best.

'ya gotta grow up sometimes, cant wash your dick off in dirty pussy''


Words to live by right there.

lost it at puddle of mudd

Emmure and In This Moment!
TERSE
Top

how to write an Emmure song: tune to drop-z and play morse code on the open notes

This is the first year the lineup turned me off

Someone mentioned to me that the Full Terror Assault Outdoor fest is also the same place they have the gathering of the juggalos Of The Juggalos. Full stop.

This is the day that we are asking every single Juggalo to join us in our nation’s capital, Washington, D.C., to make a collective statement from the Juggalo Family to the world about what we are and what we are not. Recently Psychopathic Records’ court case in our lawsuit against the F.B.I. and Department of Justice for listing Juggalos as a “loosely organized hybrid gang” in their 2011 Gang Task Force report was once again dismissed, meaning we are back to square one from a legal standpoint. We have tried to use the American judicial system to achieve justice and we failed.

So on Saturday, September 16, 2017, we are taking out fight to the streets. Literally.

As many of you are no doubt personally aware, the FBI’s inclusion of Juggalos as a “gang” has resulted in hundreds if not thousands of people subjected to various forms of discrimination, harassment, and profiling simply for identifying as a Juggalo. Over the past five years, our legal team has heard testimonies and reports from Juggalos all over the nation who have lost custody of their children, been fired from jobs, denied access into the armed forces, and the most common consequence — being officially labeled as a gang member by law enforcement agencies for wearing Juggalo related clothing or brandishing one or more Juggalo tattoos. A simple traffic stop for a broken tail light can — and has — resulted in an otherwise law-abiding, hard-working, taxpaying citizen being put on a local or state list of gang members simply for displaying their Juggalo pride. Being labeled a gang member can be a permanent stain on an individual’s life, since it will come up in a simple background check every single time. Whether that person is applying for a job, trying to adopt a child, join the armed forces, or attempting to acquire housing … their name may pop up as being “gang-affiliated,” even if that person has never been charged with any kind of crime.

This is the day we not only march on our nation’s capital, but we will also be throwing a FREE concert to further display the collective power of the Juggalo Family. We will be personally inviting all of the bands and performers who have over the years professed to support Juggalos and asking them to join us in making our stand. One key reason we are planning this march and concert more than a year in advance is so no musician or group can say they didn’t know about it/didn’t get invited/or had a “scheduling conflict.” With more than a year’s notice, these musical acts have plenty of time to save the date and perform in support of the Juggalo Family in Washington, D.C. And Psychopathic Records will be personally – Yes, PERSONALLY – inviting every single band to attend. So if you get to the concert that night and are wondering why this band or that band isn’t performing on the lineup … you will have to ask them why. At this point, it’s time for everyone to put up or shut up. You say you’re a recording artist who supports the Juggalo Family’s fight against discrimination? Then be there. Live. In person. In D.C. along with thousands of Juggalos standing up for their civil rights and the rights of others who have been oppressed or discriminated by reckless law enforcement agencies.

That is the date that the Juggalo Family must truly shine and show America and the world that we are not a gang, public menace, cult, or any of the other untrue labels they have attempted to slap on us throughout the years. We must collectively show them that we truly are a family that is united by a shared love of music and fellowship. We help and support each other like no other so-called “fanbase” ever has in the history of popular culture. We give each other food or water if someone is hungry or thirsty. We lend emotional support to each other in times of sorrow or struggle and we celebrate with each other in times of triumph. We may be the outsiders, the misfits, the weirdos, and the underdogs of the mainstream world, but as a result we have created our own world – one built on a rock-solid foundation of community, creativity, joy, and love.

That is the date we need YOU in Washington, D.C. We need you and your voice to make sure that we shout above the chaos of this noisy world and are heard loudly and clearly as we deliver a message right into the nerve center of America that the Juggalo Family is not a joke, punchline, or any form of criminal organization. This is our chance to make a difference. A real difference. To show the world that we will we not tolerate anymore discrimination against our Juggalo brothers and sisters. If being a Juggalo has made a difference in your life, we beseech you to be a part of the important critical day in Juggalo history.

That is the day we rise up.

That is the day we unite to clear our name.

That is the day we march.

ahaha I had to bail during the first chorus

Did Violent J get gastric bypass?
There's the life and there's the consumer event.
Top

the biggest takeaway from that clip is the ICP TABLETOP RPGs 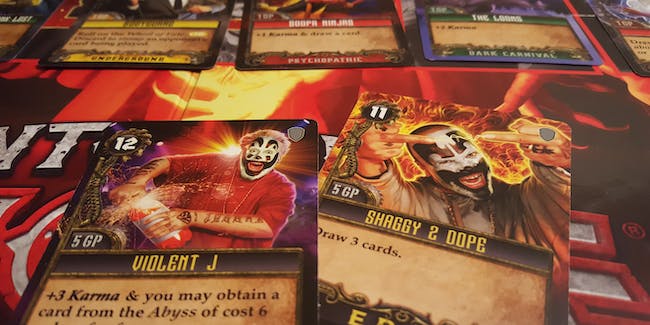