okay i have very little exposure to this. the setting looks tropical, are there a bunch of injurious flora and fauna on avatar?

get it the fuck out of here

get it the fuck out of here

I used to feel this way - but the best argument I've heard for increasing a frame rate for films is related to the limitations that were set when 24fps was decided as the default. It's pretty shitty for capturing scenes with a lot of movement - but 60 or even 48fps looks weird! Doug Trumbull (SFX for 2001, Close Encounters, Star Trek - tons of shit) was working on "Showscan" technology where things are shot in 120fps. The movie itself would mostly be 24fps, but they increase the frame rate in quick bursts - like when someone throws a punch, for example. Because they're dropping the frame rate to 24, they also could also easily replace blurry frames with clearer ones taken slightly later. I think he used this tech when he made the Back to the Future Ride?

That is fucking awesome

Thanks! I appreciate that - I'm very self conscious about posting here (or anywhere for that matter) and I almost deleted this moments after posting it.

I put together a video for a presentation at work about Douglas Trumbull (and the guy who helped inspire him, John Whitney). It's not super in-depth, but it's a decent introduction to how influential they've been.
Top

thanks for posting that video, hunter - that's extremely similar to what's going on with the avatar HFR implementation

however, I am pretty sure that the first movie (and maybe the second movie) was prepared (filmed IRL and CGI rendered) in 24 fps, with interpolated frames being generated after the fact. this streamlines the entire production pipeline - removing the need for capture of more frames of additional film and saving huge amounts of render time for the CGI stuff - while still delivering the same clarity (when needed) being pitched in the showscan video.

I have no fucking idea how the CGI footage simulates the filming process - your video reminded me that IRL 24 fps has the shutter closed for half the time. is JC rendering Avatar CGI to deliberately mimic this artifact? I'm sure he's thought plenty about this over the years...

Necrometer wrote: ↑Fri Nov 11, 2022 8:50 am thanks for posting that video, hunter - that's extremely similar to what's going on with the avatar HFR implementation

however, I am pretty sure that the first movie (and maybe the second movie) was prepared (filmed IRL and CGI rendered) in 24 fps, with interpolated frames being generated after the fact. this streamlines the entire production pipeline - removing the need for capture of more frames of additional film and saving huge amounts of render time for the CGI stuff - while still delivering the same clarity (when needed) being pitched in the showscan video.

I have no fucking idea how the CGI footage simulates the filming process - your video reminded me that IRL 24 fps has the shutter closed for half the time. is JC rendering Avatar CGI to deliberately mimic this artifact? I'm sure he's thought plenty about this over the years...

Maybe you're right, but I think that's a bit of a strange way to go about it. Couldn't he film the actors at a higher fps so you could un-blur the the action when dropping down to 24fps as a first pass? Then when working on the CGI - it could still be rendered at 24fps, but wouldn't need so much artificial blurring trying to match that of the actors footage. I'd imagine that process would help the CGI look more integrated with the camera footage. Maybe I'm misinterpreting you - and I honestly have no idea how it was done, but I can't argue with the results!
Top

I think you understood me correctly. I'm imagining a workflow like: get 24 fps film footage, put that into the computer, make computer generate 24 fps CGI footage (some of which is a composite with film), print 24 fps "movie", add some post-production HFR by interpolating (extremely computationally "cheap" compared to rendering CGI), send 48 fps file to projectors (with almost all those frames being repeats/duplicates).

I probably don't understand this shit well enough to say anything meaningful about why your way wouldn't be optimal. one thing that comes to mind is that maybe JC wants things to look blurry in a way that's familiar and feels cinematic. I once met a guy that worked on the first movie, doing post-production tweaks of lighting/color and stuff. the most memorable thing he told me was that the intent on Avatar was not to make the CG stuff look like real life, but to make it look like a hollywood movie, which doesn't actually look like real life. with that in mind, I could see some level of blur being desirable, simply because it feels a certain way for the audience. but the 3D "jitter" is a fresh problem that needs to be dealt with, apparently.

in the teaser trailer, there's a shot that has been hotly debated - is it CGI or is it practical?

they discuss the shot extensively (starting at 3:45), arguing that it cannot / would not be anything but all-CGI, because:
1. consistency: JC wouldn't add a random practical shot in an all-CGI movie
2. it's clearly not painted skin (you would need to tattoo the actor), skin is slightly translucent
3. it's not a composite (real water, CGI blue alien) - too hard to "paint out" the actor and add in the CGI alien

I agree with #3, but it's pretty easy to shut down arguments #1+2:
1. this is countered by the fact that the first movie has a rubber Neytiri hand prop for the shot when she puts the mask on Jake. if you focus on it (at home, looping it), it's obviously a rubber hand, but you'd never notice this in the theater. The shot is around 57s here.
2. na'vi “skin” is much less difficult to simulate IRL than human skin; it’s less translucent, which was probably a deliberate choice, to make it easier to render, especially in 2009. their skin looks relatively waxy, much more similar to what can be attained using paint. weta also has an incredible practical effects team, and I think they could paint someone blue reasonably well, matching the hue and sheen of the CGI output.

so hope is alive, right? IT GETS BETTER. some guy who actually worked on avatar 2+3 (he has an IMDb listing) weighs in (in the comments on the video above) and says the following:

But they did film live action water shots. Like the hand close up pulling the leather straps.

Considering I worked on the film and was standing there in the studio when they filmed this shot I think I might know what I’m saying. I’m not saying it’s 100 percent real but they did actually film it.

I’m not denying there’s lots of VFX elements in the hand leather shot but we did film it for real. The team at Weta are excellent and best in class but we did Film live action water scenes like the hand one with people. You’re right I don’t work in VFX I work in the camera department. I’m not sure why I would lie about working on the Avatar sequels.

I never said they used the water from what we shot live action for the final shot. As I said previously I’m not saying it’s 100 percent real. I never said the water in the shot is real. All I’m saying is that we filmed it for real with a guy painted blue, not in a MOCAP suit. If they used it or not I don’t know.
You’re right I can’t truthfully 100 percent comment on the VFX process or elements they kept or didn’t keep and neither can the Corridor crew or you unless you worked in the digi team on the film. Sure there’s patents and white papers or whatever but It’s all speculation guessing what’s real and what’s not. I also don’t need to prove to you my involvement with these films.

They could have filmed the real thing as a guide and then recreated it with cg? It looks like cg to me, personally. But i dont have an expert robot brain.

yep, totally possible - I'm being a bit hyperbolic with my victory lap

the guys in that video talk about a patent filed by weta for developing "water film" CGI technology, so it could have been purely reference footage... to master CGI water films 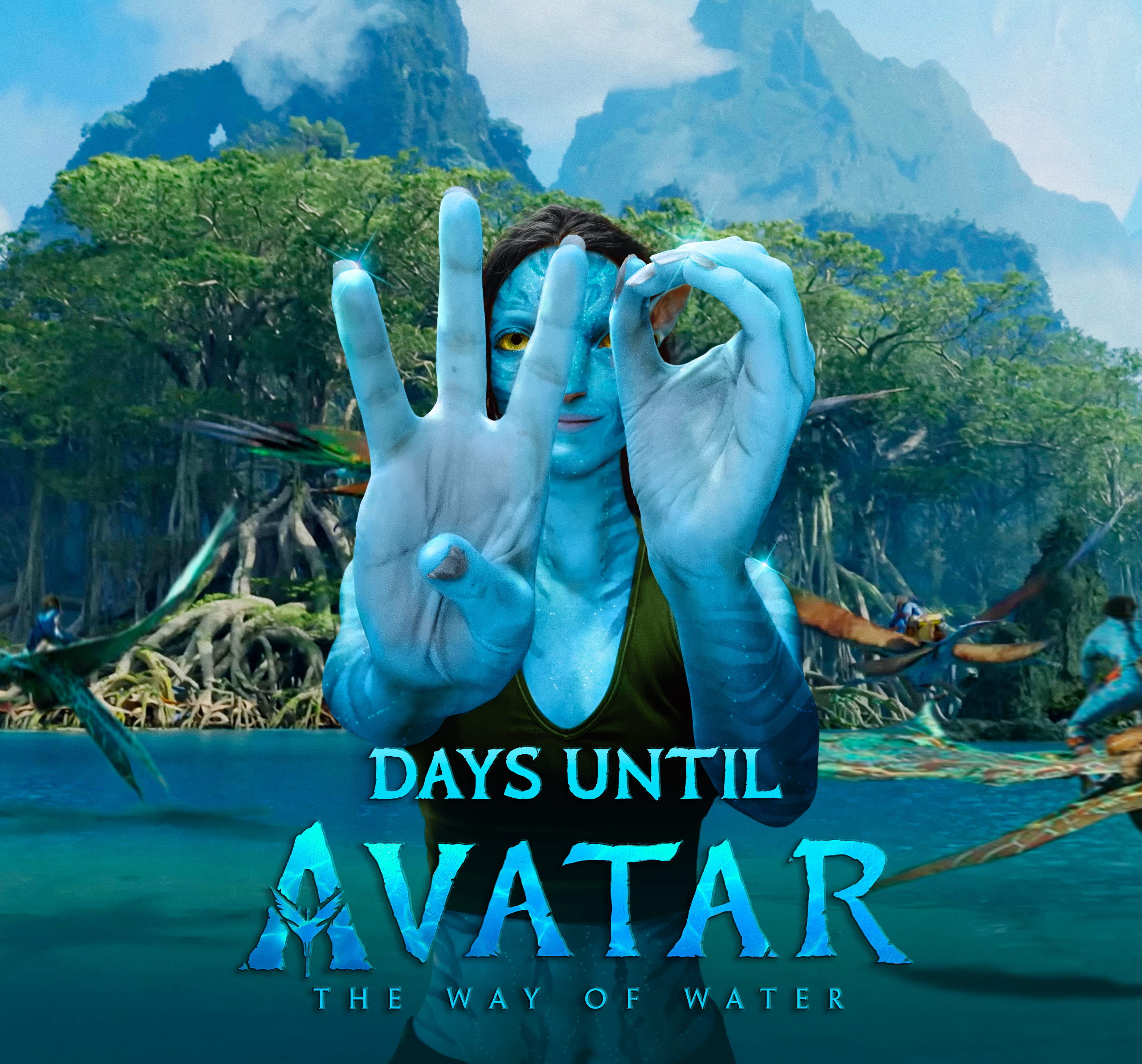 I must do my part

got my tix, taking an afternoon off

if anyone has questions about HDR, HFR, 3D glasses technology, Dolby, IMAX, resolution, etc... I am here for you

james cameron is a vegan - where's the solidarity?

teaser for the final trailer:

wait what? this changes everything...

b/c you are an ally

I didn't know he had a limp due to asymmetric legs, though - that's kinda interesting

I was also reminded recently that he did ALL the handheld (non-crane) camerawork for the first avatar. that's pretty rare, I think?

this part from the GQ profile was the worst - he clearly ripped off terminator's plot from a couple of outer limits episodes. just own it!

Cameron has a rich dream life to this day, he told me: “I have my own private streaming service that’s better than any of that shit out there. And it runs every night for free.” Avatar, too, originally came to Cameron while he was asleep. “I woke up after dreaming of this kind of bioluminescent forest with these trees that look kind of like fiber-optic lamps and this river that was glowing bioluminescent particles and kind of purple moss on the ground that lit up when you walked on it. And these kinds of lizards that didn’t look like much until they took off. And then they turned into these rotating fans, kind of like living Frisbees, and they come down and land on something. It was all in the dream. I woke up super excited and I actually drew it. So I actually have a drawing. It saved us from about 10 lawsuits. Any successful film, there’s always some freak with tinfoil under their wig that thinks you’ve beamed the idea out of their head. And it turned out there were 10 or 11 of them. And so I pointed at this drawing I did when I was 19, when I was going to Fullerton Junior College, and said, ‘See this? See these glowing trees? See this glowing lizard that spins around, that’s orange? See the purple moss?’ And everybody went away.”

let's also pour one out to james horner, all time world chamption of self-plagiarism