Necrometer wrote: ↑Wed Mar 11, 2009 10:12 amAll those too cool to appreciate anything James Cameron's even done, kindly fuck off.

just bumping this in hopes it'll survive 'til 2020 (or beyond) for A2: the search for more money

has anyone been on that flying avatar ride at disneyworld?

Necrometer, you seriously don't care about the shitty CGI in this trainwreck of a film? I'm not even baiting here...

the fine grain detail is far from perfect (the aliens & creatures look overly rubbery) but I'm slightly nearsighted so that fuzz helps sell the effect in theaters. I do not really enjoy watching this movie on an HDTV. I do think the physics & feel of the CGI elements are leagues ahead of the weightless nonsense in the hobbit trilogy, though. also, they were making it up as they went along - the effects in the special edition shots are way better than the stuff they completed at first. so hopes are high for the sequels' visuals!

You really think so?? I doubt it makes a ton, but it has to make at LEAST $5 million.
There's probably going to be more international interest too, which might be hard to predict.

I think it's a good idea for everyone to make sure Avatar retakes the throne, whatever the case may be. There's no fucking way Avatar 2 comes anywhere close to the top spot... I just don't think people are really interested. James Cameron almost certainly had access to some kinda nuclear weapons or water-bomb at this point, and I don't want him to kill everyone once he realizes he'll never have the top spot ever again.

Avatar made $200M in China a decade ago, making it the biggest of all time there. that market has since more than quadrupled, so there's essentially $600M worth of market there who has never seen it in theaters. Endgame is just barely squeaking by Avatar's record, so it'll need a few tens of millions. Titanic re-release made like $57M and that movie doesn't even have any sexy aliens in it!

also, trump is working hard for another recession, which means more weak-dollar rocket fuel for Avatar 2. don't count it out!

Hi there, just wanted to say I genuinely have NO idea how this movie ended up as the #1 movie of all time. What was the hook for people ?? Titanic I got because women are fucking pathetic and predictable and Marvel movies I got because nerds are fucking pathetic and predictable, but this dumb trash I don’t understand it even a little bit
HEAD BOPPAZ RECORDS YOU BITCH-ASS HOES
Top

everyone keeps laughing at this but

also Hi there, just wanted to say I genuinely have NO idea how my boner ended up as the #1 boner of all time.

no way it can be worse than genisys?


riley-o wrote: ↑Mon Jul 22, 2019 9:47 pmHi there, just wanted to say I genuinely have NO idea how this movie ended up as the #1 movie of all time. What was the hook for people ?? Titanic I got because women are fucking pathetic and predictable and Marvel movies I got because nerds are fucking pathetic and predictable, but this dumb trash I don’t understand it even a little bit

furries are pathetic and unpredictable

I did love terminator 2 and true lies

guess I'm getting a benz!

yeah you're right, china is going to make it massive and its probably being made with that in mind
tee hee
Top

whats going on with her speech in this clip??

thank you for posting that! I had watched that video after I saw someone post one on the Cats soundtrack (same channel). that guy's cats video was better IMO. he calls out tons of insane shit that happened with the music of Cats... like... they actually recorded it live on set. and they let the actors set the meter. like... their whims were the click track. a completely hellish way to make music. I guess there's a song where rebel wilson sang only the MIDDLE line from a 3-part harmony, which is a bold choice to say the least. I don't have the ear for this sort of thing so I can't notice anything beyond "this is not great". I couldn't believe he didn't talk about the audio quality - the orchestra sounded so cheap-synth-y, and not in a fun way. anyway... the cats video is recommended!

I totally appreciated the avatar music breakdown, but I think I ultimately disagree with the ultimate conclusion that what happened is "ironic". the (1) white savior & noble savage stuff in avatar has its shittiness, and the (2) way that they THOUGHT ABOUT making a super weird world-music soundtrack - but then didn't - that's also frustrating. but I don't think there's a conceptual connection between those two things. cameron did (1) because he's trying to tell a moralistic, allegorical story to a white audience, and he did (2) because he wants his movie to make its money back.

and on that note... breaking news!

it was and always will be #1 for me

I kinda think it's 'cheating' or fake to re-release a movie 10 years later and then claim to have overtaken the competetor's record... but both Titanic and Endgame used re-releases to set their records, so I guess it's just baked into this particular competition.

I think that Disney has absolutely no shot at replicating the Endgame box office, at least not with the Marvel franchise. If Cameron wants to re-take the title, maybe Avatar isn't the right vehicle? After Titanic and Avatar, what if he unleashes a third assault? Completely different movie!

Whoever wins, I will lose 3 hours of my life. That's all I know.

ALSO just realized that Avatar 2 is almost certainly going to release in 3D, and that I'll go see it in 3D to get the 'real' experience... which will hopefully be the last 3D movie I ever see, because the only good 3D movie I've ever seen was Avatar. Those glasses are annoying and it's too expensive.

next movie is apparently 15 petabytes - about 15 million gigs

that’s plenty of space for a nascent skynet to be gestating somewhere in there, just by chance


because we were
the first movie production in history to hit
one petabyte of storage.
And now we're at 15.
And going strong.
And the project doesn't end until 2028.
So just everything is up, 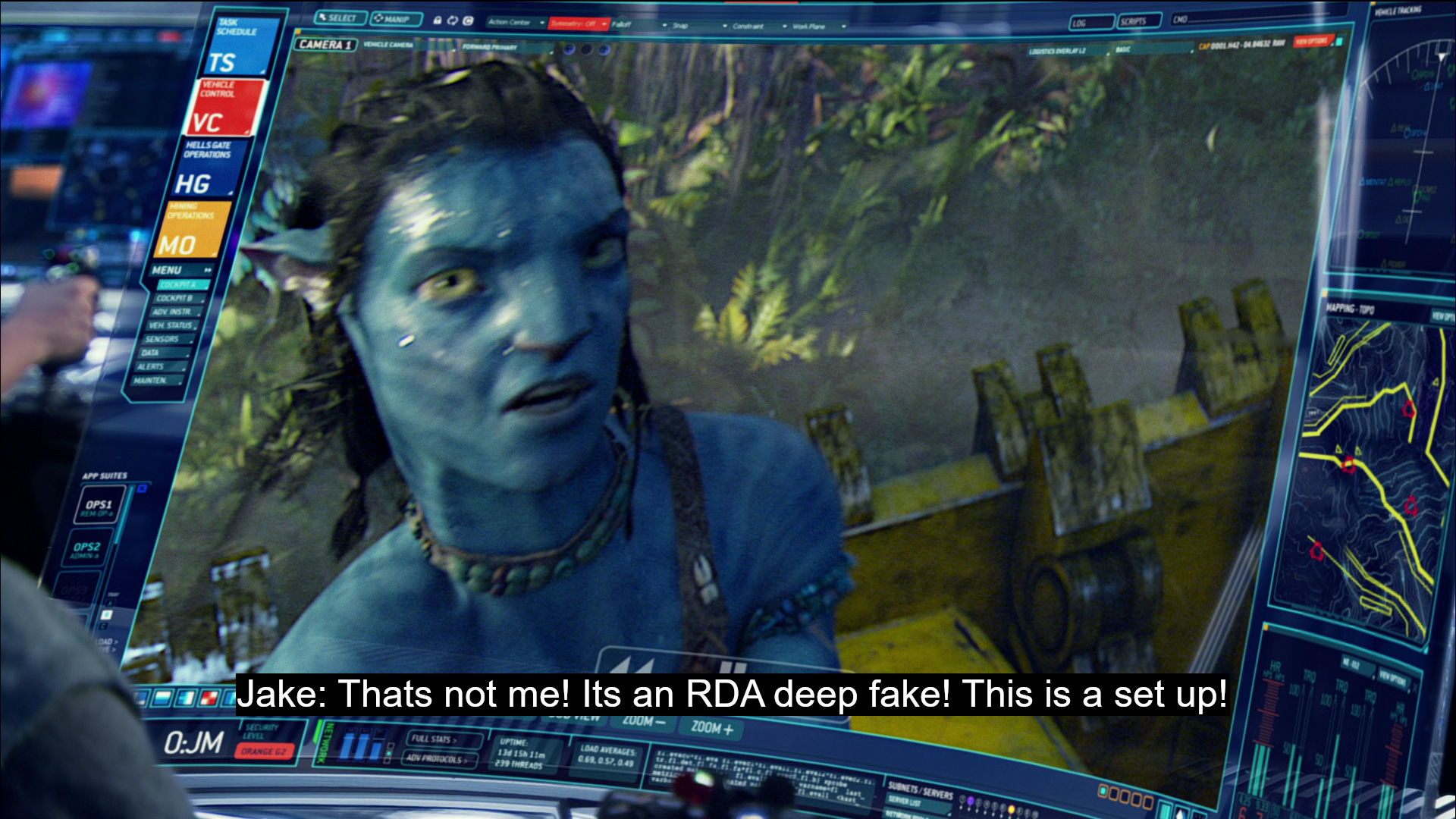