Looks to me like he already made his own Kakabox, so I guess the problem fixed itself.

"Nina, I have lost my concentration..." - Putin 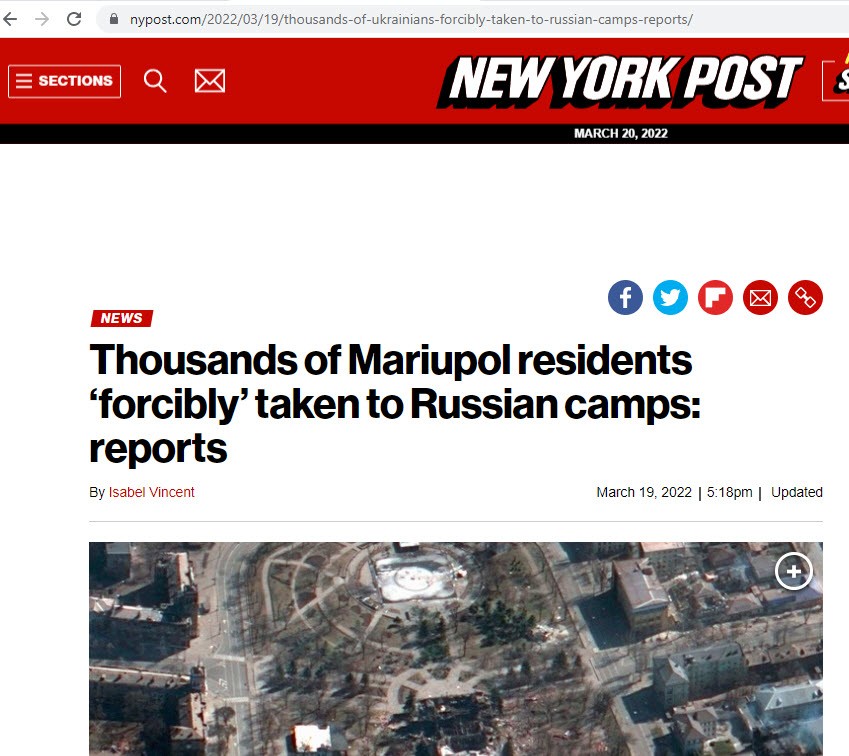 "Nina, first you sympathized with neo-Nazi skinheads in Toronto after high school. Then you married a white supremacist who beat you while you were pregnant. And now you are Tweeting the Kremlin's propaganda for DE-Nazification as if you were for that your whole life or some shit" - Putin

"But only you were not smart enough to realize that they were one and the same. Congrats you fat droopy tittied old babushka from Edmonton!"
Top

im gay and my dick is small

"Nina, why my own personal staff try poison me? I am such nice person" - Putin 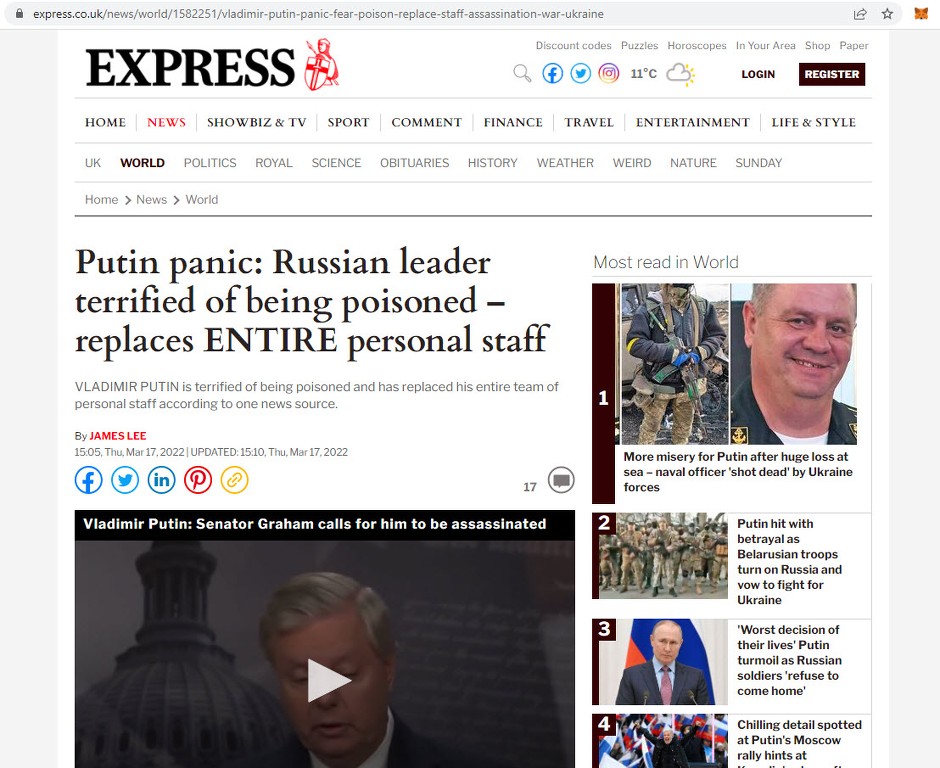 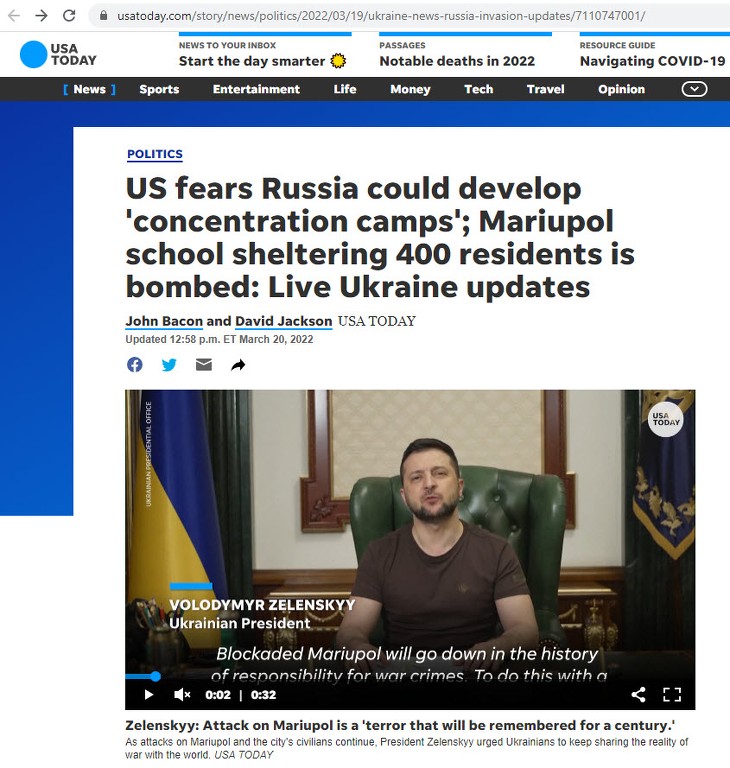 "Nina, vawt will you do when the 2nd coming of X-Men Magneto reads your Twitter feed? So awkward..." - Also Putin 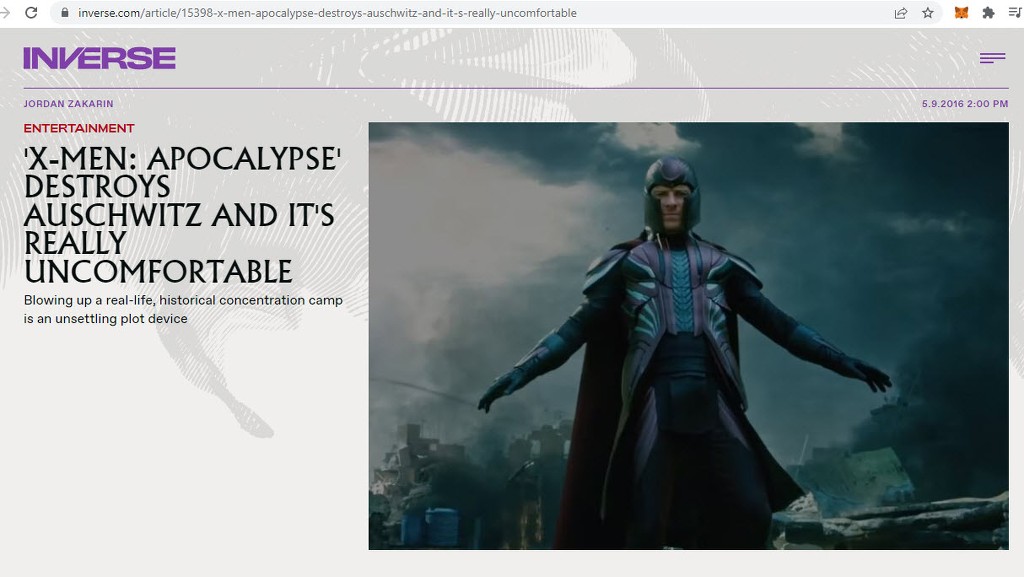 The worst part is that Nina's mom and dad worked so hard to get her out of Soviet Russia to Edmonton as a young child only for her to wind up doing do this. They may as well have stayed in Russia and let her farm rotten potatoes for life.

Meanwhile Russians have to flea to Georgia because nobody wants to let them in the EU or the US or the rest of the world for that matter.

Meanwhile Russians have to flea to Georgia 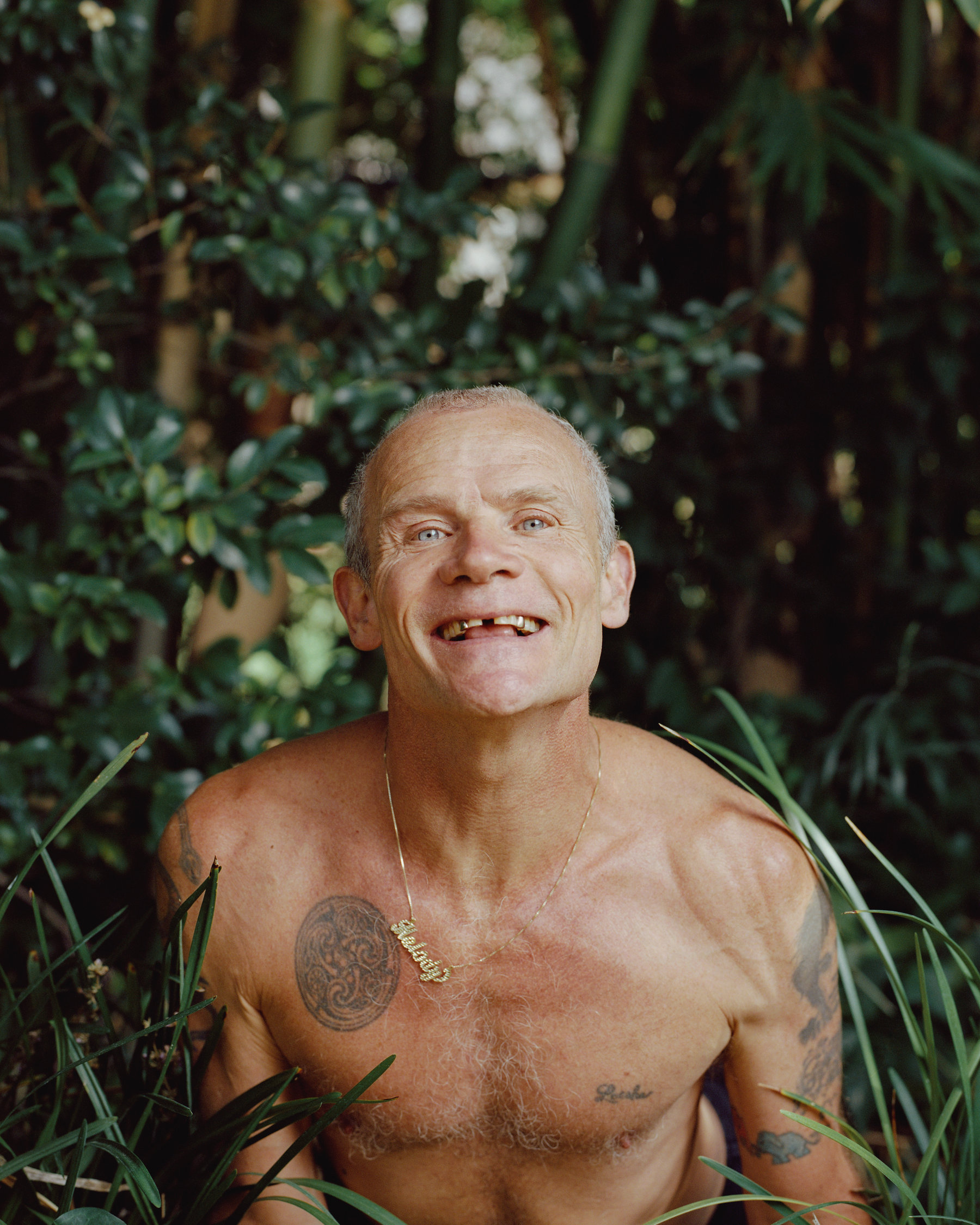 cxwx wrote: ↑Thu Mar 17, 2022 3:15 pm Chris until you are able to use the millions you made from
Porntoken to get Nina to do an episode of “black payback”
stop posting.

I get offers from women with huge breasts who can take their bra off without their tits falling on the floor every damn day.
Women who will happily let you use their butthole for sex and swallow your load with a smile on their face for a reasonable price.

What the fuck do we need bitches that glorify a genocidal murderer in Russia on Twitter to gain notoriety as a Kremlin troll and scoff at BJs and amusing non-conventional sex for? 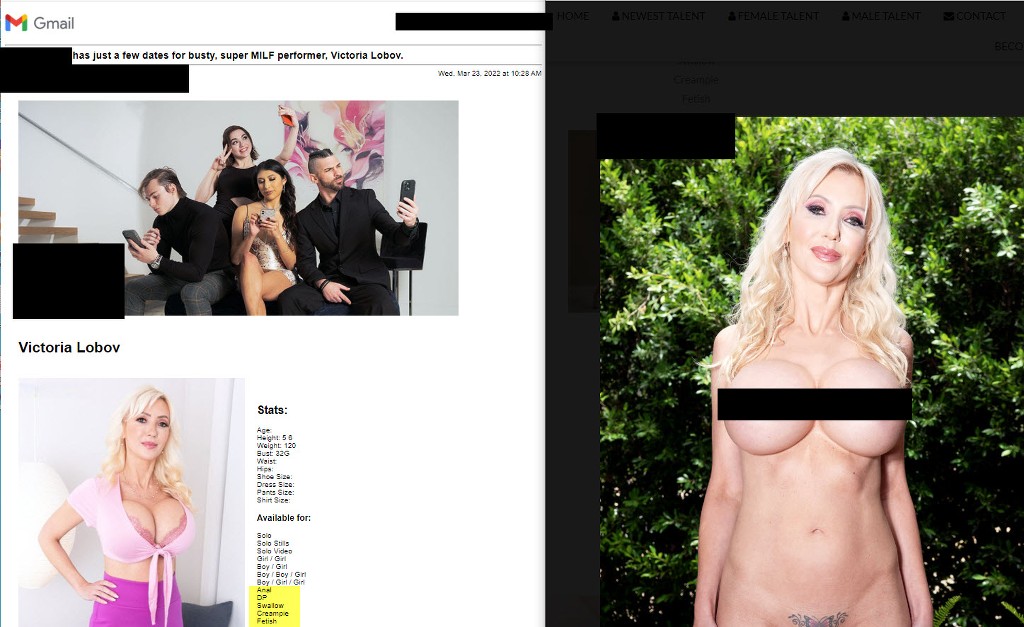 
"I promise not to co-operate out of blind faith to Kremlin and not to smile because Russians don't smile ever. I only do dis for cash money because I desperate" - Nina

What the fucking fuck. Get out.
Top

What happened to cdnpal though
Top

It never got any seed capital to grow and so it ran out of money and was sold on Flippa.com for 16k. Oh well. 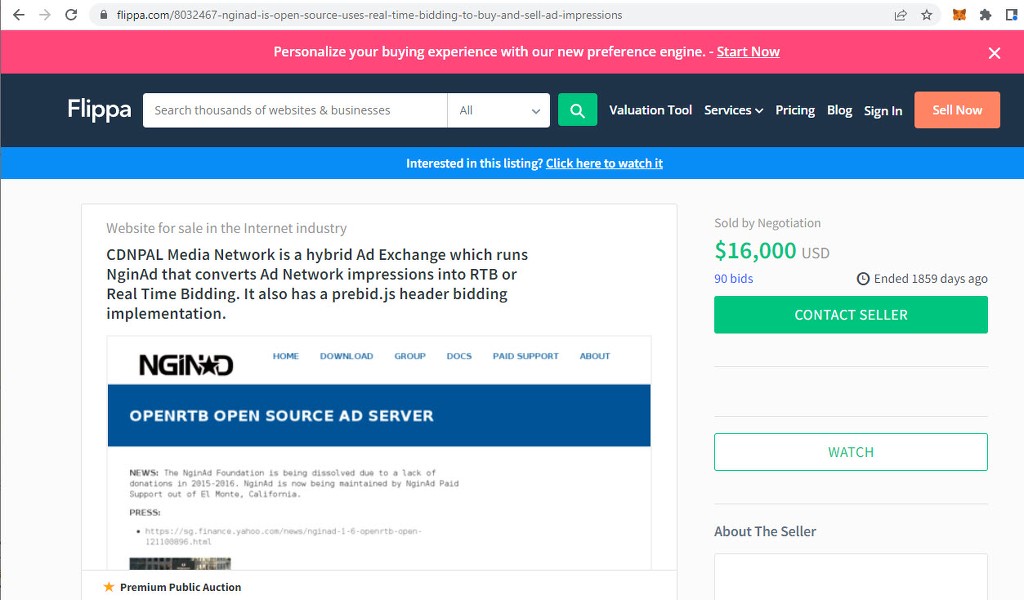 Funny story with that flippa sale is this. The winning bidder was a wealthy Ukrainian. I have worked with lots and lots of Ukrainians actually. Great people. Totally not like Nina Russian wanna-be. Certainly not like the successful Russian whores that actually made it.

Nina is insane. It's sad that she believes herself.

She says over and over again that:

1. China is her friend and that they will bail out Russia. I happen to go to China and I know Chinese people very well. In many tangible ways communist Chinese are literally my family. And her fantasy bail out of Russia is absolutely not the case. They will wait until Russia is weak then take what they want from them.

Nina retweets Chinese state run media constantly as if they were going to pay her or back her like Eileen Gu or some shit.
That's the level of delusional/desperate she is.

She even repeatedly says how NATO bombed a Chinese embassy. The woman slept with and married neo-nazis from her college years in Toronto with Manjack to her marriage to Richard Spencer, those that were largely responsible for Japan in WWII decimating China to the point that they run anti-Japanese movies on state TV 24/7. Somebody should tell her Twitter audience that. I actually have more Twitter followers than her so it's tempting. 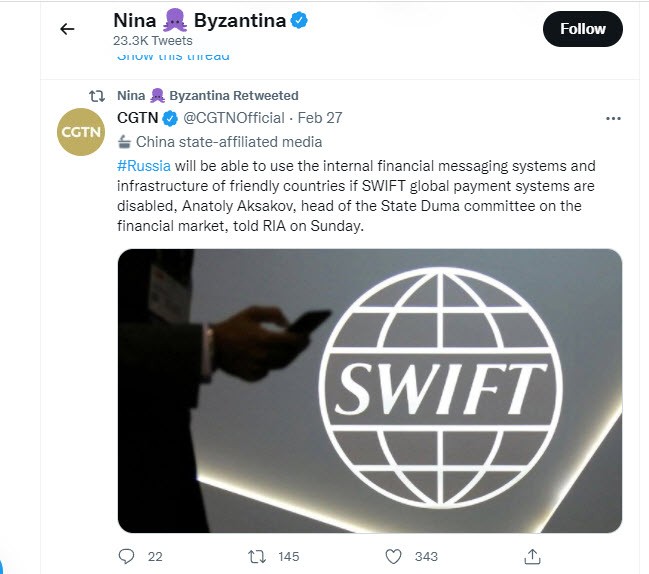 2. She says over and over again that sanctions don't effect Russia. Watch this video for a sec and you can see she is nothing but a liar.

3. At less than a dollar for 100 rubles, Russians are now poor as dirt. I say hire a few and make them denounce Putin for NFTs then sell the NFTs at super high prices as a business plan. Actually maybe they can denounce Nina and the alt-right too in the NFTs as an added bonus feature. Calling herself Russian when she grew up in Edmonton in Canada, and selling out to Chinese state media, then trolling Ukrainian anti-war protesters.

There's nothing that low. It's beyond being a political media whore (and a literal blow guys with your mouth whore). Very pathetic.

With 2 kids you would have hoped she would have taken care of them instead of pursuing this. But they are Richard Spencer's kids so maybe not in this case.
Top

1. You grew up in Edmonton Alberta because your parents fled Russia when you were young. They fled Russia not because it was this great place you speak of on Twitter, but in fact because it sucks really, really bad.

2. You next VISITED Russia only as an adult but lived your entire life in Canada and much later the mid-west of the US

3. You only dated Polish neo-Nazis as a college student in Toronto then married an American white supremacist leader because you thought it would boost your own profile in the media. The former got beat up in front of you for being a Nazi skinhead, and you just watched.

4. You now retweet Chinese state media, as if they like you or care about your social media persona saying they are going to save Russia. Actually they have no such intent at all what so ever. They remain neutral only for now, to see what they can get out of Russia when it's in a very weak state.

5. You post pictures of yourself doing all sorts of "Russian" activities on Twitter with American flags and Russia "brand" apparel that NO ONE in Russia would wear in a million gazillion years.

6. You went skating and skiing but didn't even bother to bring your 2 kids, nor do you ever mention anything about them. Probably because you neglect them just like you were neglected by your parents. They will end up being attention seeking whores with severe mommy and daddy issues too 99%. This is most likely because their dad is a hated white supremacist and you resent them. But lets face it they are kids, it's not their fault.

7. There is so much wrong this list could go on forever, but lets just leave it at that. 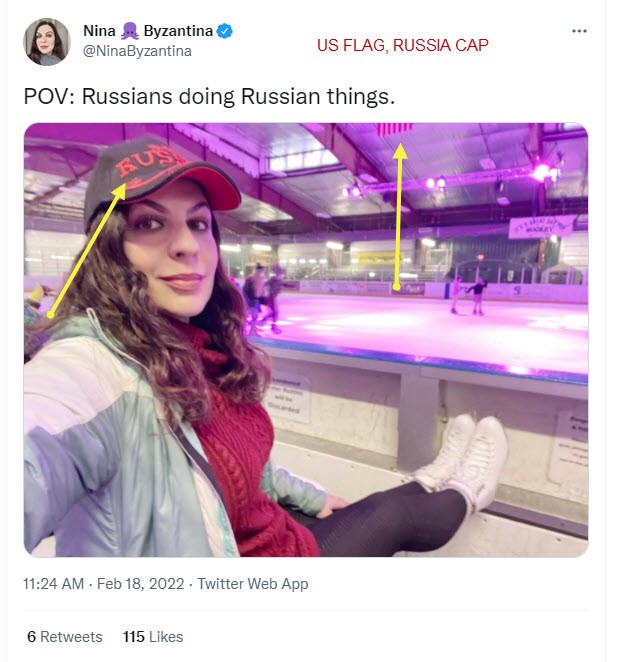 If you're still here, can you answer please in the capacity of a fake wanna-be Russian and almost life-long white supremacist neo-Nazi companion, and explain to us how Russia is not the Jussie Smollett of Nazi-ism? 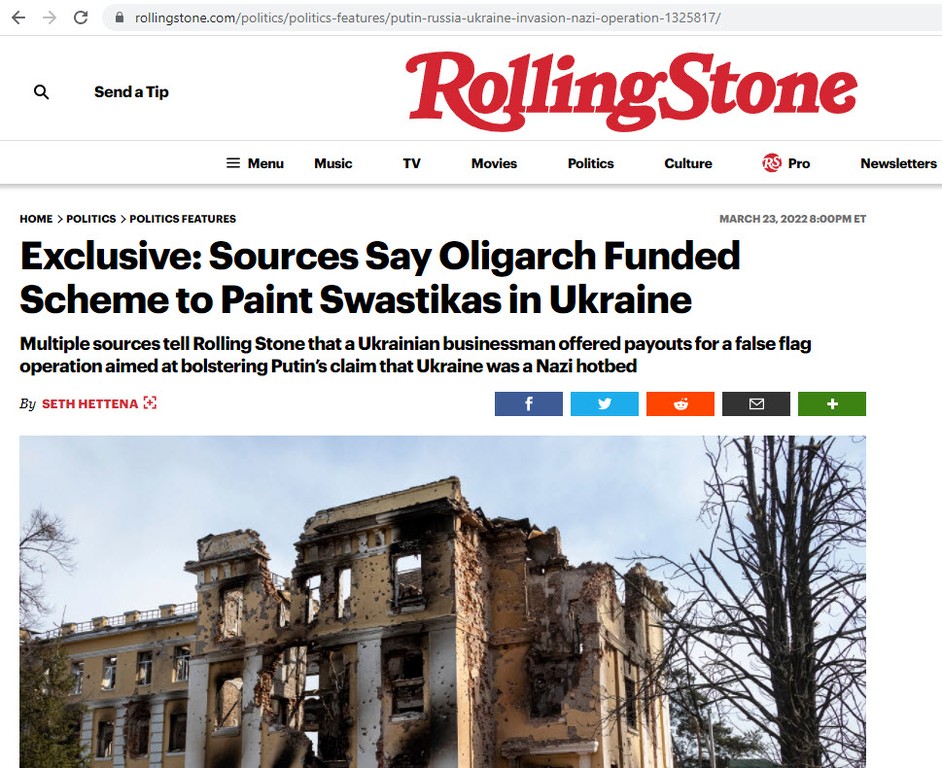 Why does "your government" * have to scare ordinary Russians into leaving to Georgia and saying that they are afraid of speaking out?

* It's not really her government, her parents ran away from it to Edmonton when she was merely a child. Like Roman says in the video, she's a person that never had to live in Russia as a permanent citizen so she projects a bunch of imagined bullshit of her imagined Russian life in the US and Canada.
Top

How come they won't play this on Russian state TV? Don't they want people to know what's going on? 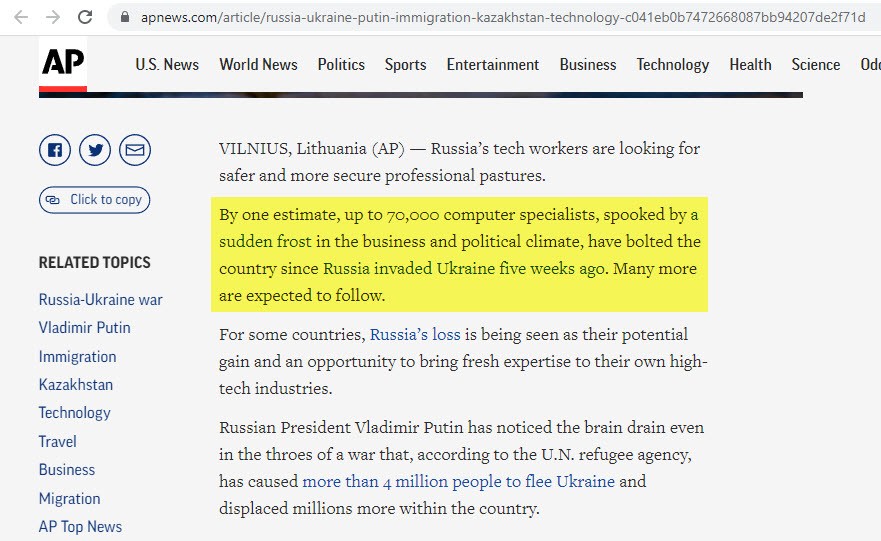 Does kaka know that "Barks!" isn't reading any of his war reporting, 4 pages deep now and counting?

Why are Ukrainian civilians being shot reporting that Russian troops are stealing their money and valuables out of their pockets after they are injured? 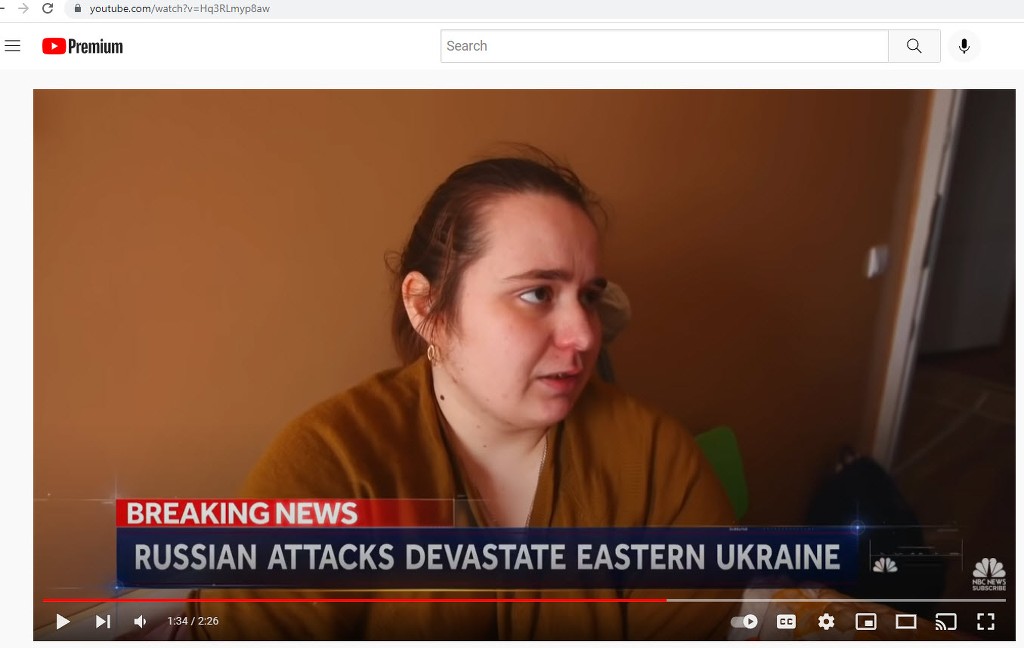 What kind of special military operation is this? It now seems the Russian army went to Ukraine to rob people of their valuables. Not unlike the Nazis did.

Chris do you agree that the CIA knows that beings like bigfoot, ghosts, loch ness monster, etc exist... but that the CIA engages in a conspiracy to conceal the existence of such things, so that they can recruit these extraordinary beings, and use them to carry out high-profile assassinations and covert black ops counterterrorist police actions?

I think it's logical to assume that if someone learned the truth about Bigfoot being the second gunman in the Kennedy assassination, nobody would believe them, because people generally don't think Bigfoot is real.

I think it's something worth considering, and it's obviously true, and I was wondering if you could share your thoughts on this issue.